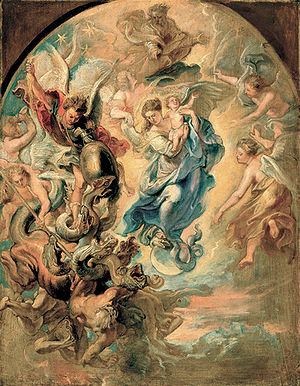 Since I am in an apocalyptic mood I thought it would be nice to have some more war, but let’s brighten things up a bit at the same time. Don’t worry, I won’t ignore the multi-headed devourer that threatens our existence, I just think that the Woman Clothed with the Sun might shed some light on what we should do in our predicament.  Forgive me for not being quite as lugubrious as usual.

Just read something interesting on Our Lady of Guadalupe:

Father Juan de San Miguel, SJ preached these words in 1671 during the consecration of a side chapel of the Mexico City Cathedral dedicated to Our Lady of Guadalupe.  I can only assume that the context of the remarks would indicate that he is speaking metaphorically.  He certainly is not saying that the image of Our Lady of Guadalupe is a “sacrament” in the proper sense of the term.  Nevertheless, a comparison with the Eucharist is valid.

The whole point of the continuous miracle of the tilma, which is comparable to the perduring miracle of the Real Presence of the Eucharist, is to reassure the members of the Church Militant that the Woman Clothed with the Sun is really with us and is ready to manifest that presence in power and victory.  John Paul the II made the central thought of his Marian encyclical “the role of Mary in the mystery of Christ and on her active and exemplary presence in the life of the Church.” That active and exemplary presence is going to bring the red dragon to the mat.  Just you wait.

Father Juan notes the ostensible difference between sacramental transubstantiation and the miracle of the tilma.  Jesus hides himself under the accidents of bread and wine in order to exercise our faith and to assume a form by which we partake of Him as our food.  Mary sheds the accidents of the flowers in order to manifest herself as the Woman Clothed with the Sun.  In the Eucharist we humble ourselves through faith and reverence.  Through the lesser charismatic grace of the tilma we are given an extraordinary sign of Our Lady’s presence and reason for confidence in the midst of conflict.

This was precisely the case historically when Our Lady appeared in Mexico.  The power of hell had been unleashed in Mexico through a diabolical religion and through the vices of the Conquistadors.  God had his way through the Woman Clothed with the Sun.

Soon the novena in preparation for the Solemnity of the Immaculate Conception will begin and within its octave we will celebrate the Feast of Our Lady of Guadalupe.  These are times in which we need unwavering confidence.  Make or renew an act of consecration to Our Lady.

St. Maximilian Mary Kolbe also saw the connection between the Eucharist and the power of the Immaculate Conception:

We want Her to think, to speak and to act through us. We desire to belong to the Immaculate to the extent that nothing will remain in us that is not Her, so that we may be annihilated in Her, transubstantiated into Her, changed into Her, that She alone remains, so that we may be as much Hers as She is God’s. She belongs to God, having become His Mother. And we want to become the mother who would give the life of the Immaculate to every heart that exists and to those that will still come into existence. That is the M.I.–to bring Her into every heart, to give Her life to every heart. Thus entering these hearts and taking full possession of them, She may give birth to sweet Jesus, who is God, that He might grow in them in age and perfection.

If Father Juan looks to an extraordinary sign to find the presence of the Woman Clothed with the Sun. St. Maximilian looks to our own transformation which is a matter of constant effort at purification through prayer and penance (annihilation) and the power of God through Our Lady (transubstantiation).

It’s the consecration, stupid.  Our Lady at Fatima told us this when the whole contemporary mess got started.  When are we going to figure this thing out?