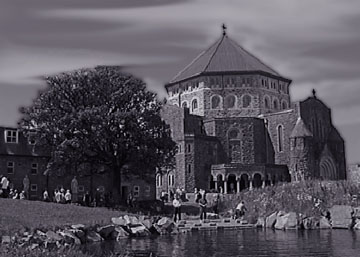 From the Golden Legend:

On a time as Saint Patrick preached in Ireland the faith of Jesu Christ, and did but little profit by his predication, for he could not convert the evil, rude and wild people, he prayed to our Lord Jesu Christ that he would show them some sign openly, fearful and ghastful, by which they might be converted and be repentant of their sins. Then, by the commandment of God, Saint Patrick made in the earth a great circle with his staff, and anon the earth after the quantity of the circle opened and there appeared a great pit and a deep, and Saint Patrick by the revelation of God understood that there was a place of purgatory, in to which whomsoever entered therein he should never have other penance ne feel none other pain, and there was showed to him that many should enter which should never return ne come again. And they that should return should abide but from one morn to another, and no more, and many entered that came not again. As touching this pit or hole which is named Saint Patrick’s purgatory, some hold opinion that the second Patrick, which was an abbot and no bishop, that God showed to him this place of purgatory; but certainly such a place there is in Ireland wherein many men have been, and yet daily go in and come again, and some have had there marvellous visions and seen grisly and horrible pains, of whom there be books made as of Tundale and others.

Every Lord and Lady of Lepanto should have the guts to make a real retreat: END_OF_DOCUMENT_TOKEN_TO_BE_REPLACED