The Congress also occurs at a time when the Church throughout the world is preparing to celebrate the Year of Faith to mark the fiftieth anniversary of the start of the Second Vatican Council, an event which launched the most extensive renewal of the Roman Rite ever known. Based upon a deepening appreciation of the sources of the liturgy, the Council promoted the full and active participation of the faithful in the Eucharistic sacrifice. At our distance today from the Council Fathers’ expressed desires regarding liturgical renewal, and in the light of the universal Church’s experience in the intervening period, it is clear that a great deal has been achieved; but it is equally clear that there have been many misunderstandings and irregularities. The renewal of external forms, desired by the Council Fathers, was intended to make it easier to enter into the inner depth of the mystery. Its true purpose was to lead people to a personal encounter with the Lord, present in the Eucharist, and thus with the living God, so that through this contact with Christ’s love, the love of his brothers and sisters for one another might also grow. Yet not infrequently, the revision of liturgical forms has remained at an external level, and “active participation” has been confused with external activity. Hence much still remains to be done on the path of real liturgical renewal. In a changed world, increasingly fixated on material things, we must learn to recognize anew the mysterious presence of the Risen Lord, which alone can give breadth and depth to our life.

The above paragraph from a message of Benedict XVI to the Fiftieth International Eucharistic Congress in Dublin last year is a great summary of the Holy Father’s teaching on liturgical reform.  The statement reaffirms the importance of the liturgical reforms mandated by the Second Vatican Council which center on the fostering the full and active participation of the faithful. The external changes were intended to help bring about an internal change, namely, the transformation that takes place when the soul has a personal encounter with Christ.  According to the Pope, the relative failure to accomplish this task has consisted in the changes remaining on a merely external level. For this reason these changes have been distorted into something that was never intended, namely, liturgical abuse.  Thus, the “reform of the reform” consists in properly understanding the meaning of active participation and the external reforms in relationship to it. END_OF_DOCUMENT_TOKEN_TO_BE_REPLACED 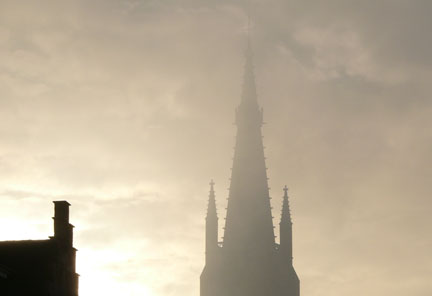 In this essay I continue to register my thoughts on traditionalism and liturgy, specifically with a discussion of the expressed motives for Pope Benedict’s promulgation of the Motu Proprio, Summorum Pontificum.  After this post I plan to take up where I left off with my “Traditionalist Sleight of Hand” essay.

The current biformity of the Roman rite, established formally by the Motu Proprio, Summorum Pontificum, is a reality that has existed and has been spoken about as such by Joseph Ratzinger for many years.  He has said numerous times that the old form, that is, the Extraordinary Form, was never abrogated.  However, the Motu Proprio establishes by way of “universal law” this biformal liturgical discipline, presumably, attempting to stabilize, at least for now, this condition as the liturgical status quo:  two forms, one ordinary, the other extraordinary.  The motives for this have been variously interpreted, and it seems to me that something parallel but antithetical to what happened in regard to the interpretation of the documents of the Second Vatican Council has happened in respect to the text of Summorum Pontifcum.   I hope to make this clear as well as suggest a sound alternative. END_OF_DOCUMENT_TOKEN_TO_BE_REPLACED