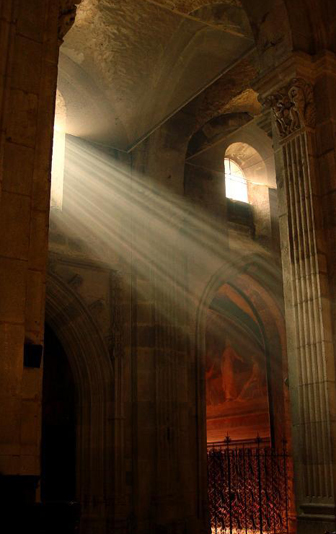 In my post for Holy Thursday, I mentioned the mystogia, the Easter catechesis in the early Church that was given to the newly baptized in order to deepen their understanding of the faith, especially regarding those central mysteries celebrated in the liturgical events of the Paschal Triduum.  In this post, I am offering my own little Easter mystogia in relation to the values of Marian Chivalry.  At the center of this paschal enlightenment are the two principle Christian relics that became the focus of chivalrous ideals, the Holy Grail and the Holy Sepulcher.

The mystogia was particularly necessary because of a custom practiced from the earliest times of the Church called the disciplina arcani, “the discipline of the secret,” whereby the most profound mysteries of the faith were kept hidden from heathens and from even the catechumens preparing for baptism.  The special—but not only—object of this discipline was the Eucharistic Sacrifice and Sacrament.

Hence, one of the minor orders of the Church—in fact, the lowest—in preparation for diaconate and the priesthood was Ostiarius or “Porter.”  In the Roman rite, the Porter was the gatekeeper who locked and unlocked the church, and who made sure that no unbaptized person was present for the “Mass for the Faithful,” or what is referred to in the Novus Ordo as the Liturgy of the Eucharist.  Catechumens were permitted to be present for the “Mass of the Catechumens” (Liturgy of the Word), but then were escorted out of the Church by the Porter at the beginning of the offertory.  The catechumens’ first experience of “The Mystery of Faith,” celebrated at the altar, was immediately after their baptism, when they were escorted into the Church in their white garments.  The first time the newly baptized received the Eucharist, they had just moments before become aware of the full truth of the Church’s teaching on the Eucharist.

Reverence Inside and Out 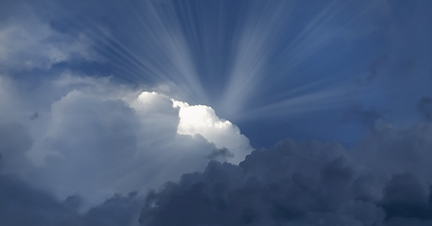 St. Basil compared the discipline of the secret to the way in which Moses, by God’s command, reserved certain parts of the tabernacle by putting in place “sacred barriers.”  He wrote that “the awful dignity of the mysteries is best preserved by silence.”  And “Moses was wise enough to know that contempt stretches to the trite and to the obvious, while a keen interest is naturally associated with the unusual and the unfamiliar” (On the Holy Spirit, 27).

Imagine the joy of the newly baptized who were privileged to know the sacred mysteries and their exultation at being able to participate in so awesome a mystery while being introduced more fully by the post-baptismal catechesis into the truths of our faith.  Think also of how fearful the mysterious must have seemed, in terms of inspiring awe, reverence and gratitude.  What a tremendous grace was contained in the revelation of the mysteries and how beautifully was both the superabundance of God’s grace communicated while the dignity of the mysteries preserved and augmented.

As more and more it became necessary to defend the faith against heretics, apologetical tracts of the Fathers protected less and less of the secret, until the discipline was entirely abandoned.  One might also understand that in the face of Gnosticism and many other Christian heresies that secret keeping could lend itself to the privileging of a few to the detriment of the universality of the Church.   After all, the lure of secret keeping has been to form exclusive societies in which the initiated can pride themselves on being enlightened and being in control of the unenlightened.

Even so, we may regret, at least theoretically, the complete loss of the discipline of the secret, especially today when the introduction of the mundane and even the profane into the precincts of our sanctuaries have stripped the faithful of a sense of the sacred and mysterious.  The tragic consequence of this has been the systematic cultivation of irreverence.

Revealing What Is Hidden 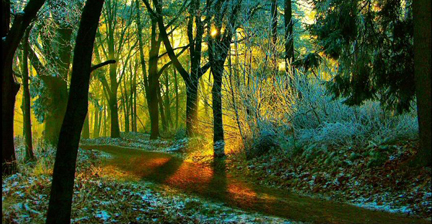 But the discipline of the secret is built into the sacred mysteries we celebrate during Easter.  Our Lord celebrated the first Mass in the upper room into which he ensconced the apostles for the preservation of the mysteries of Holy Thursday.  Into that enclosed space they would return, as a huddled and fearful band, after the events of Good Friday, and into that enclosed and locked space Our Lord would reenter in order to reveal to them that which he did not reveal to all.  As St. Peter said of himself and his companions, the Lord manifested Himself not to all the people, but to witnesses preordained by God, even to us, who did eat and drink with him, after he arose again from the dead (Acts 10:41).

Our Lord also initially hid Himself from His inner circle, as He did to St. Mary Magdalen at the Holy Sepulcher, to the disciples on the road to Emmaus and to Peter and his companions at the Lake of Galilee.  Certainly this deprivation of their ability to recognize Him was symbolic of their own lack of faith and of the power of the Resurrection to break down that barrier against faith. They knew him in the breaking of bread (Lk 24:35).  But may we not also reflect that the revelation of what was hidden underscores the mysterious content of the faith and the mystical or dark way in which the activity of God touches our soul?

St. Bonaventure says that we must enter the tomb with Jesus—into another enclosed space—and there we must die and experience the suspension of our senses.  He is not necessarily referring to ecstasy, but what belongs more fundamentally to the mystical life, namely, a new way of thinking that is not dependent on what we see, but on what the Lord tells us.  Of course, first of all that means what the Church teaches, but it also must mean the manner in which we assimilate it through our own efforts to surrender in faith in the silence of prayer. 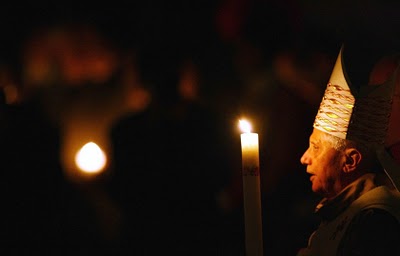 The Easter proclamation is the so-called kerygma, that kernal of truth at the heart of evangelization, and it must be broadcast to the four corners of the globe.  That which I tell you in the dark, speak ye in the light: and that which you hear in the ear, preach ye upon the housetops (Mt 10:27).  That proclamation is this: “The night will be as clear as day:  it will become my light, my joy” (Easter Praeconium).  But each person it touches by way of the hidden workings of God:  So is the kingdom of God, as if a man should cast seed into the earth, and should sleep, and rise, night and day, and the seed should spring, and grow up whilst he knoweth not (MK 4:26-27).

In inner revelation of the Holy Sepulcher and the Holy Grail, has nothing to do with esoteric knowledge entrusted to a secret society or any other species of Gnostic, though these heretics have gotten lost along the way of a real quest for a real treasure.  Indeed, all along, it was quite literally under their noses: For lo, the kingdom of God is within (Lk 17:21).

Today we sell our secrets for a bowl of porridge and repackage old and used rags and peddle them as lost and hidden treasures.  Just call the most meager and pathetic truism a secret, such as the power of positive thinking, and then absolutize it with false promises and you can make millions of dollars on the same old stale snake oil.  Or take a real secret, such as the secret of our personhood, that leads us to veil our sexual values, and call it prudery and the snake oil business is booming once again.

Modesty, reverence and the guarding of the heart, are perhaps the most precious jewels to be cultivated by the truly honorable and courteous heart.  It is for these values that true prowess is willing to suffer and die.  The enclosed spaces of the Tomb and Chalice, like the Womb and Heart of Our Lady, are the places where Thy Mystery of Faith is celebrated and where the revelation takes place.

I will have more to say about the Holy Sepulcher and Holy Grail in my next Easter post.