Paul @ Catholic Discussion on the late and great Marc Girard.

Here is the blog for Carol and the kids, Thom and Marc’s family.

The Chicken B-bque was a great success.  You can read about it there.

The Norwich Bulletin, as of this posting, has placed the friars latest video on Thom and Marc on their homepage in three parts.  This video altogether is about 12 minutes and is different than the In Memoriam video.

The link above will only help you find the video clips as long as the Bulletine keeps them on their homepage. 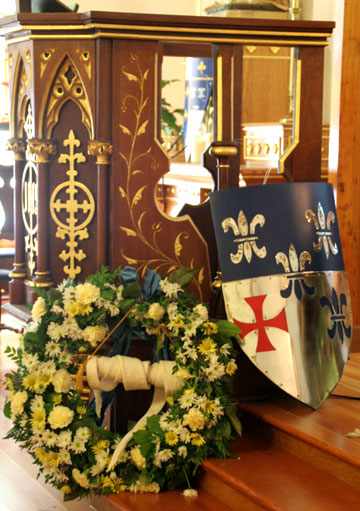 During the Encampment on Friday night, we conducted a ceremony during which we lit two bonfires with flaming arrows (we have to work on the flaming arrow part) in remembrance of Thom and Marc and promised never to let them go out.  On Saturday night we revealed the work that we friars had been doing over the past week:  three shields, one for the Knights of Lepanto (pictured above), one for Thom and one for Marc.

I am no herald, but I have done some private research on heraldry, so if anyone reads this blog who has suggestions or corrections, I am completely open to them.  For an explanation of the arms of the Knights of Lepanto see this post.

By the way, for anyone who cares to help me out with my heraldry, the blazoning of the arms of the Knights of Lepanto I render thus:  Per fess azure and argent, a fleur de lis counterchanged between two fleur de lis argent and a cross formy gules dexter,  a fleur de lis azure sinister.  That is just a guess.  I really don’t know what I am doing.  I concur with Chesterton:  “Anything worth doing is worth doing badly.”

My intention is to bestow full knighthood in an official capacity upon both Thom and Marc posthumously.  Both of them were in formation for knighthood; however, we have had no formal investitutures or doubings yet in the organization.  Even so, it seems that the two of them providentially entered the order of knighthood during the last encampment. END_OF_DOCUMENT_TOKEN_TO_BE_REPLACED

I have much to blog on regarding the Encampment.  I will get it posted as I am able.

First of all, I have an oath that the Knights asked me to write for the squires and pages.  Actually the idea was Thom’s and he had planned to write it himself.  As a former scout master he wanted to model our oath on the Boy Scout Oath.   Well, he never got an opportunity to write it so I did. END_OF_DOCUMENT_TOKEN_TO_BE_REPLACED

Just added a link to the schedule for the weekend on the Encampment page.

Also, I have revised the page to reflect the fact that the memorial for Thom and Marc will be at the campfire on Friday, not Saturday.

As unspeakably sad as the last week has been, I cannot remember one that was more filled with grace and peace. I have been privileged to witness heroism, steadfastness and mercy.

Thom and Marc, their family and friends have been searching earnestly for the ideals of chivalry; however, none of us would have considered the plate we have been served “quite the something” we “were after.” We must always praise God for His goodness.

Last Monday, when through one of the friars I received a distressed call from Carol in which she asked one of us to meet her at Bachus Hospital, I was swept up into a series of events so inconceivable to me that the mind still balks at its consideration. I knew the situation was dour when I heard the words “drowning” and “Life Star” though in reality, I had no idea of the real dimensions of the tragedy.

My mind still short circuits when I think of the hole left in so many lives by the absence of Thom and Marc, but at the same time, the past week has etched into my mind some of the most precious memories of my life. Like many who were privileged to know Thom and Marc and to participate in their sending off, I have been overwhelmed by the presence of God during this difficult time. END_OF_DOCUMENT_TOKEN_TO_BE_REPLACED

It is only now that I have been able to bring myself to announce formally on this blog an event of immensely tragic proportions.  Two of our Knights of Lepanto, father and son died by accidental drowning on Monday, June 30.  Thomas Girard, was pronounced dead at the scene around 8:30 pm and his son Marc died around 2:00 am, July 1 in Providence hospital.

Thom was one of our finest knights and a first rate example of all I wanted the knights to be: courageous, committed, kind, geniune and loyal.  Mark was his father’s son.

Thom has been the Grand Master of all our encampments, both last year and this year.  He had many years experience as a scout master, but more than that he had really imbibed the Spirit of Lepanto and understood how to communicate it to others.  He really was what I wanted all the knights to be.

Marc was inducted into the Knights at the spring encampment this year, after having been among the squires since we began the Knights several years ago.  When Thom became distressed as he was swimming with his daughter Hanna, Marc, who was swimming with his younger brother Lucas, told his brother to continue to the other side, went to the rescue and saved Hanna’s life and then attempted to save his father also.  Marc died a hero, a true knight.  He was his father’s son.

Please pray for the repose of their souls.  The one consolation I keep returning to is that now we have two knights who, in the words of St. Maximilian, have both hands free.

Thom wrote an elaborate knight’s “ritual” by which we could induct the older boys into the Knights of Lepanto.  We have used it only once, for the induction of Marc back at the Spring Encampment.  I reproduce part of it here.  The words of the “Father” were pronounced by me, but the whole “ritual” was written by Thom.  This was a dialoque between father and son: END_OF_DOCUMENT_TOKEN_TO_BE_REPLACED