Soon to be released by the Academy of the Immaculate.  A great read in preparation for the Year of Faith: 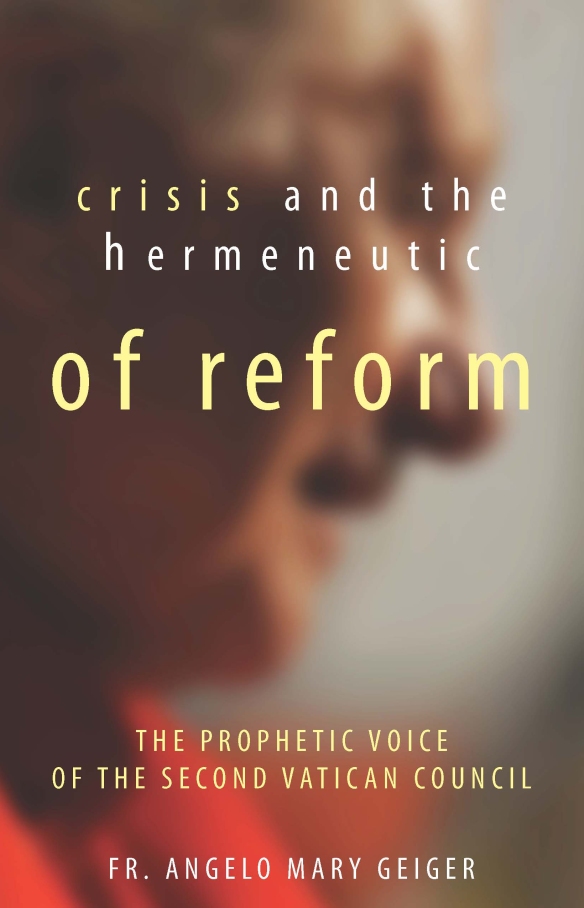 The well-documented, clear exposition of the issue by Father Angelo is among the best available in any language. It is a must read for anyone concerned with current controversies in the Church and with the efforts of Pope Benedict to resolve these bitter conflicts: those stemming from a one-sided love of tradition, and those stemming from a naïve confidence in modernity and secularism. In both cases, the ultimate response to each is Mary, Spouse of the Holy Spirit and Mother of the Church, prophetic voice of Vatican II and profile of its pastoral vision for the Church.

Fr. Angelo Geiger has done us all an immense service by carefully differentiating between “traditionalism” and the Catholic Tradition with a capital T. The use of the 1962 Roman Missal is one thing. The baggage that all too often accompanies its celebration is quite another. Surely both the Missals of Blessed John XXIII and of the Servant of God Paul VI are expressions of Catholic faith and my fond hope for many years has been that these two forms of the Roman Rite will eventually coalesce. What Fr. Angelo does, however, is to expose the agenda of many of the most avid promoters of the 1962 Missal. In fact not a few of those would really like to retreat to even earlier editions of the Tridentine Missal so as to avoid the Holy Week reform of the Venerable Pius XII. If so, how far back must we go? I believe the point is we must go forward under the guidance of the Holy Spirit and trust in the leadership of the Successor of St. Peter.

With theological discernment, he refutes the polemics of modernists, gnostic intellectual elites, pseudo-charismatics, and especially “traditionalists”. All these disturbers of ecclesial peace and unity assume to speak with the prophetic voice of the Church while undermining the Petrine ministry which alone has doctrinal authority to settle disputes affecting faith and morals. Real renewal of the Church demands fidelity to the Marian and Petrine principles of the Church heralded by its great Saints.

Fr. Geiger has written a beautifully clear and comprehensive defense of the providential inspiration behind the Second Vatican Council, faithfully following the hermeneutics of continuity and reform proposed by Pope Benedict XVI. It is of great value to anyone who wishes to deepen their understanding of the critical responses to the Council from both the modernist and the traditionalist ends of the spectrum.

—ROY SCHOEMAN, AUTHOR OF SAVLATION IS FROM THE JEWS