Nobility is a patrimony of excellence handed on from one generation to the next.  Fathers consider it their responsibility provide their sons with a better and more honorable life than they themselves have had.  In turn, sons consider it their responsibility to treasure what they have received, to respect it and preserve it, and again, to augment it for the next generation.  This is the ideal.  The tradition of chivalry is one of the means by which it is strived for.

One can rightly say that the leaders of the Boy Scouts of America have had the same noble responsibility, and tragically have failed to preserve and hand on the excellent patrimony of scouting in America to the next generation.  Instead, through their capitulation to the homosexual agenda, they have created a profound contradiction between the broadbased ideals of scouting and the natural law.  Worse, they make it impossible for Catholics to clarify and lift-up the scouting ideal in the light of the full revelation of Christ. END_OF_DOCUMENT_TOKEN_TO_BE_REPLACED

The Fall Father and Son Encampment has been cancelled for a number of reasons, not least of which is my current status of living mostly in New Bedford until November when a new Guardian will arrive to take over the run of the house there.  It may be a good time to take a break anyway, as we have been tossing ideas around about how to make the Encampments better and the preparations more manageable.

Right now we are talking about taking the weekend “off campus,” so to speak to a campground and conducting perhaps one larger event every year, instead of three smaller ones.  (We will continue to use the obstacle course at the friary for other events.)  I would also like to open the Encampment to boys who have no fathers (or fathers who are involved with them at this level), since fatherlessness is a big problem and one that has long concerned me.

Please pray for the Knights of Lepanto who have worked so hard to make these encampments a success.  We have had a great deal of positive feedback and are very much encouraged.  We hope to have something really great, innovative and powerful in the Queen of Lepanto to present for next year.  I will keep you all abreast of the developments from this forum.

Thank you for all your support and please spread the word about next years open encampment.

Here are some scenes from the last encampment:

See new image gallery on the Encampment website for a look into the father and son weekend.

Here is my homily from opening night of the encampment:

Check out the website for details on the next encampments as well. For the moment that really consists mostly in the dates and example schedule. I will soon have the registration page back up with the specifics. 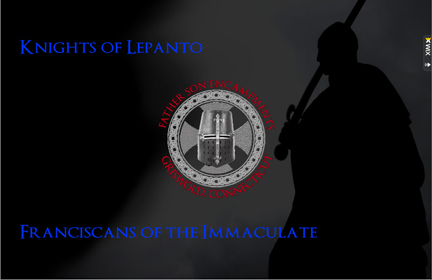 Everything you need to know about the Father-Son Encampments. Please let me know what you think. I am open to constructive criticism. Thanks.

I am in the process of creating a new website for The Knights of Lepanto Encampments.  That should be up in a few days.  Meanwhile, I will just announce the dates again for this years events and provide pertinent information.

The Spring Encampment will feature a talk by MSG Michael M. Cutone on the Leadership of Jesus.  Here is an Airmaria interview with Michael.

And here are some PDF documents pertinent to the Spring Encampment that will be helpful:

Please print the Advertising Flyer and post wherever you can.  Thanks.

The main event of the physical activities will be a massive Capture the Flag Game! Hope to see you for the chivalrous fun.

I am creating a “Testimonies” page on the website and would be grateful for all contributions from the men–and boys–who have attended. In terms of the men, I am especially interested in those who are not among the organizers. Please send your contributions of three or four sentences to mv@figuadalupe.com or leave your response in the comment section.

I would also be grateful for suggestions for the “Frequently Asked Questions” page. Please let me know what should be included there, especially if you had a confusing time and would have liked to have something answered before you arrived. Send your responses by leaving a comment.  Thanks again.

While I was home with my mother in California I saw several old movies that carried the theme of manliness and fatherhood:  How Green Was My Valley (1941) and The Magnificent Seven (1960).

How Green Was My Valley is an American Film directed by John Ford based on the novel by Richard Llewellyn.  The story is set in South Wales in a small coal mining village and concerns the life and times of the Morgan Family as seen through the eyes of its youngest member Huw, played by a 12 year old Roddy McDowall.  Huw has five older brothers, all of whom work the coal mines with their father Gwilym, played by Donald Crisp who for this role won an Oscar for Best Supporting Actor. (The film also won Oscars for Best Film and Best Director, among other categories).

What struck me about the film was the way in which the father was portrayed as a strong but gentle man.  Gwilym is a real patriarch who has to deal with changing times and the vicissitudes of raising a family in a place with an uncertain economic future.  He is a stern old man, but never unkind.  He is committed to the welfare of his family and thinks little of himself.

There are two scenes that stand out in my mind.  In the first, the five sons who work with Gwilym respectfully disagree with him over the need to unionize the coalminers in the face of layoffs and pay reductions, a step that he would not support because of his objections to socialism.  The men are hesitant to cross their father, but are unwilling to be dishonest about their true convictions.  It is a very interesting vignette of a father maintaining his authority in a reasonable way without being overbearing.  The sons choose to leave home, but eventually come back in support of their father when the mother, Beth (Sara Allgood), defends Gwilym before all the minors in town.  There is a real sense of the burgeoning masculinity of the sons inevitably clashing against the authority of the father, and the old man managing it with both tenacity and self-restraint.

The other scene has to do with young Huw’s problems at school due to the prejudices of wealthier children and even of the teacher.  He takes a beating from one of the older boys and when he comes home bloody and bruised his father promises him a graduated monetary reward for each injury he will subsequently endure.  He then asks Huw if he is willing to go back to school and when the lad says yes, Gwilym sends for the town pugilist.  And so the boxing lessons begin.  Of course, Beth vehemently objects, but is overruled by Gwilym and the boy is on his way wholesome self-reliance and manhood.

There are several other examples of strength, compassion, good humor and selflessness on the part of Gwilym that make this film portrayal of a father highly memorable.

The Magnificent Seven is a Hollywood remake of the Japanese film by director Akira Kurosawa, The Seven Samurai (1954).  When Yul Brynner saw the Japanese original he immediately conceived the idea of recasting it as a Western.  The basic plot for both films concerns a townspeople of a small village that are being periodically raided by bandits.  Without any other solution at hand, the fathers of the town contract fighting men to protect them (samurai/gunfighters).  In the American film, the fathers of the town seek to defend themselves by purchasing guns, but are advised by Chris Adams (Yul Brynner) to hire men with guns instead.  Eventually, seven professional gunfighters, including Adams are found and the rest of the movie is a juxtaposition of the seven drifters and the fathers of the town, each group exchanging values and skills:  the gunfighters learning more profoundly the value of community and family life and the fathers learning the skill of self-defense.

One particular scene is striking both because of the positive light in which fatherhood is portrayed and because the spokesman for fathers is none other than Charles Bronson (playing Bernardo O’Reilly).  Several of the young boys of the town are taken with the macho gunslinger and want to hang out with him and imitate him.   One of the boys tells Bernardo that they are ashamed to live in their town because their fathers are cowards.  O’Reilly grabs the boy, throws him over his knee, gives him a good spanking and then lectures him:

Don´t ever say that again about your fathers.  They are not cowards!

You think l am brave because l carry a gun.  Your fathers are much braver because they carry responsibility for you, your brothers, your sisters and your mothers.

This responsibility is like a big rock that weighs a ton.  lt bends and it twists them until finally it buries them under the ground.

Nobody says they have to do it.  They do it because they love you and they want to.

l have never had this kind of courage.  Running a farm, working like a mule, with no guarantee what will become of it – this is bravery.  That´s why l never even started anything like that. That’s why l never will.

Admittedly, this assessment of fatherhood is ambivalent, as was American culture in 1960. Fatherhood is recognized as a good thing, but it is seen as unglamorous drudgery. At least the man is honest enough to admit where true courage lies. The most difficult things only cease to be burdensome when they are done out of love. Courage in its profoundest sense has to do with self-forgetfulness.

The dialogue and visuals in the movie are a bit kitsch, with plenty of cliché cowboy lines and silly swagger, as well as the annoying musical score that became the advertizing music for Marlboro cigarettes, but all of it was worth enduring just to hear Charles Bronson praise fatherhood.

Blame it on the weather.  Look forward to seeing everyone next year in Spring.

Update: Encampment Cancelled due to weather.

The Encampment widget in the sidebar has been updated. The advertising flyer and the Registration form are now available in the link provided for download.

The dates for the Fall Encampment have been changed to October 16-18.