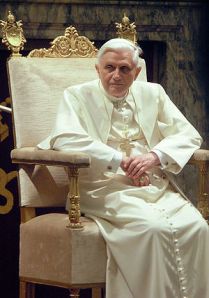 Rorate Caeli has given a translation of an excerpt of yesterday’s  address of the Holy Father to the Italian episcopal conference:

[M]ay the 50th anniversary of its beginning [of Vatican II], which we will celebrate in the fall, be an occasion to deepen the study of its texts, the condition for a dynamic and faithful reception. “That which above all concerns the Council is that the sacred deposit of the Christian faith be kept and taught in a more efficacious way,” Pope Blessed John XXIII affirmed in his opening address. And it is worthwhile to meditate and read these words.

The Pope charged the Fathers to deepen and present such a perennial doctrine in continuity with the millennial Tradition of the Church: “to pass on the doctrine, pure and whole, without attenuations or distortions,” but in a new way, “according to what is required by our times.” (Address of solemn opening of the Ecumenical Council of the Vatican II, October 11, 1962). With this key for its reading and application – according to a view, certainly not of an unacceptable hermeneutic of discontinuity and of rupture, but of a hermeneutic of continuity and of reform -, listening to the Council and making ours the authoritative indications are the path to ascertaining the ways with which the Church may offer a significant response to the great social and cultural transformations of our time, which have visible consequences also on the religious sphere.

That last sentence underscores the importance of the “supreme, effective, and authoritative pastoral office of Peter” as the only adequate principle of unity for the Church.  Pope Benedict speaks of “authoritative indications” pointing the way toward discernment in matters pertaining to the “great social and cultural transformations of our time.”  The pope is not simply arguing for the doctrinal continuity of the Council with Tradition, but also that the pastoral discernment of the Council and its correct interpretation by the papal magisterium is the work, not of man but of God.

Applying the principles of the faith to the problems of the modern world has been a complicated process.  Progressives used the liberty granted by the Council as a pretext for a modernist revolution.  It was a risk all the postconciliar popes have been to say was necessary to take, and while we can continue to argue to the end of the world about what hypothetically would have happened had there been no Council, Peter, to whom Christ entrusted his Church, has settled the matter.  This is abundantly clear, but, of course, not clear enough to those who really “know” what is good for the Church.  Take a look at the comments on Rorate Caeli.  This one, fairly moderate as they go, is a succinct summary:

It is a bit disconcerting that Cardinal Brandmüller refers to Dignitatis humanae and Nostra aetate as “non-binding,” because of a lack of “binding doctrinal content.”  Is he suggesting that “pastoral authority” is no authority?  It seems that Pope Benedict’s argument regarding the “hermeneutic of reform,” which includes both a measure of discontinuity of application within the continuity of doctrine, is not an attempt at all to declare that the Council must be followed because it is infallible, or always doctrinally binding.  Rather, it is the affirmation of the magisterium’s pastoral authority to interpret doctrine and apply it according to circumstances. Furthermore, such applications are not always merely pastoral, as is the case in regard to religious liberty.  They constitute a development of doctrine.

I find it remarkable that Pope Benedict patiently reaffirms this at every turn in spite of the unvarying responses of traditionalists.