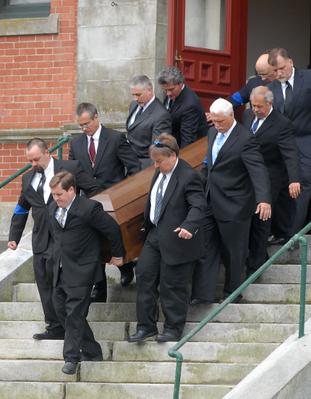 As unspeakably sad as the last week has been, I cannot remember one that was more filled with grace and peace. I have been privileged to witness heroism, steadfastness and mercy.

Thom and Marc, their family and friends have been searching earnestly for the ideals of chivalry; however, none of us would have considered the plate we have been served “quite the something” we “were after.” We must always praise God for His goodness.

Last Monday, when through one of the friars I received a distressed call from Carol in which she asked one of us to meet her at Bachus Hospital, I was swept up into a series of events so inconceivable to me that the mind still balks at its consideration. I knew the situation was dour when I heard the words “drowning” and “Life Star” though in reality, I had no idea of the real dimensions of the tragedy.

My mind still short circuits when I think of the hole left in so many lives by the absence of Thom and Marc, but at the same time, the past week has etched into my mind some of the most precious memories of my life. Like many who were privileged to know Thom and Marc and to participate in their sending off, I have been overwhelmed by the presence of God during this difficult time.

Some events that happen in life have a mythic quality, that is, they are so invested with the workings of divine providence that they are not only the history we have lived, but they also seem to be parables applicable to some greater and truer story. Thom and Marc passed through fire and water to victory, and they go before us to prepare the way.

I guess I have Marian Chivalry on the brain, but so did Thom and Marc. They carried the banner and stormed the tower. Woe to us if we dishonor their memory by not taking and securing what they won for us at the price of their lives.

I am not being romantic about what happened. Those who knew our two friends know how they believed in what they were doing with the Knights of Lepanto. I will try to explain.

When we first started our Third Thursday Discussion Group for Men the general idea was to give men a forum in which they could discuss the faith and have a sense of identity as Catholic men with other Catholic men. Underlying that idea was the conviction that men need to translate their faith and prayer into action in order to consolidate and deepen their religious convictions and spiritual practices. The idea seems to have been correct and the group of men developed into the organized assembly of the Knights of Lepanto.

It has become an apostolate of men to men and fathers to sons. Everyone has participated and contributed. I have encouraged that active and creative participation while guiding it according to the charism of the MIM to which the Knights of Lepanto belong. During this development Thom and Marc rose to places of prominent influence (among the men and boys respectively), not due to my arrangement, but by a natural democratic process. They were recognized by the men without fanfare for their commitment and understanding of both the charism and the practical means of implementing it among men and boys.

Thom and Marc loved our Blessed Mother and understood the nature of consecration to Her as a real form of knighthood. It was Thom who formulated what is essential of vow of service to Our Lady, in the form of a knightly consecration, a vow which I believe both he and Marc made not long before their passing.

When Carol was told that Thom was gone she had to hold herself together in order to tell her children. I was in a state of shock, but I saw grace at work. Thom was not gone. He was still a father. He had handed something on to his children that would last. There was sadness but no despair.

But later that night when the family and friends gathered around the bed of Marc and knew that his time had come the presence of God was palpable. We prayed for a miracle and I blessed Marc with a relic of St. Pio, his favorite saint. The moment I touched his forehead with the relic he went into cardiac arrest. We began the prayers for the dying and by the time we had finished singing the Salve Regina he was gone.

As sad as it all was, there has never been any doubt that it was their time and that somehow the loss is a key, both for the family and the rest of us. I think we have our miracle, but it is up to us to bring it to fruition.

The tradition of chivalry and the notion of nobility are tied to the idea of “patrimony,” fathers handing on to their sons and standard of excellence. Me generation has largely lost any appreciation for the common good and the responsibility we have to future generations. The highest expressions of chivalry were all about the common good and about a patrimony of moral excellence. Fathers need to be real fathers, involved with their children at every step of the way and teaching their sons how to be fathers themselves. Thom taught this to Marc. Marc was his father’s son.

All of us, including myself, take so much for granted. I was always so busy that I did not give Thom nearly the amount of time I should have. My loss.

The grace of our consecration to Our Lady we also take for granted. So much more could be done with a knighthood based on Marian Chivalry. Time is too short not to see this. The men have pulled together in the last week in the face of this tremendous loss. It is my prayer that we recognize this grace for what it really is and not let the hour of our visitation pass.

I want to thank all the Knights, Other Marys and all the friends and relatives of Thom and Mark who contributed to making the farewell to our brothers in arms such a grace-filled event.  I would also like to thank all those who commented on MaryVictrix on the two posts: In Memoriam: Thom and Marc Girard and Thom and Marc: Knights of Holy Mary Victrix at Lepanto.  Your very kind remarks are a consolation to everyone.

We are all looking for something transcendent and beautiful in life. Thom and Marc have gone before is in finding it. We have also, in a sense, found it too. It certainly hasn’t been what we expected, but I for one treasure not only memories of the last week, but the overwhelming providence of God hidden just beneath the sorrow. We cannot forget or become complacent, too much has been lost in the service of our Queen and too much is at stake. To arms, then, in the service of the Queen.

4 thoughts on “Laying Our Knights to Rest”