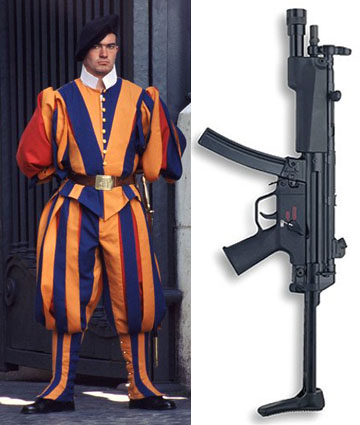 Vatican security forces now include an anti-bomb squad and a rapid response team, according to Domenico Giani, the head of the Holy See’s 130-man gendarmerie.

The Vatican will also work more closely with Interpol to gather information on any threats, he said.

The deal with Interpol, the pan-European police agency, will give the Vatican access to a large data bank of suspects and information on the latest anti-terrorism techniques.

The Swiss Guards have also been given anti-terrorism training, and now carry SIG P75 pistols and Heckler-Koch MP5 sub-machine guns, as well as their traditional halberds.

Earlier this year, Osama bin Laden repeated threats against Pope Benedict, who he accused of “leading a crusade against Islam”.

The pope has been the subject of a series of attacks since 2006, when he used a quotation in a speech at Regensburg University that said Islam was an “evil and inhuman” religion.