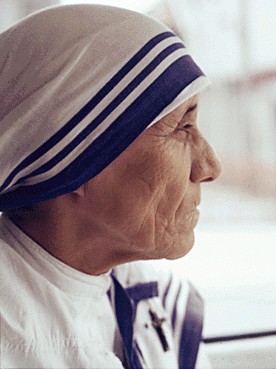 Not so long ago, with the publication of Blessed Mother Teresa’s letters to her spiritual director much misinformation was disseminated about her “dark night,” namely, that is Mother had lost her faith. The arch-atheist, Christopher Hitchen’s and other anti-Catholic enthusiasts were quick to vilify this holy woman, whose trial should be a source of edification.

Blessed Teresa, like Our Lady, took the road to Jerusalem in obedience to Jesus: Unless you pick up your cross and carry it, you cannot be my disciple. Perseverance in the dark night of faith is spiritual chivalry, spiritual prowess and largess, and in the case of Mother Teresa, it is an extension of the Marian Way of Beauty.

One cannot argue with likes of a blasphemer like Hitchens. In an debate between him and Bill Donahue of the Catholic League he referred to the faith-based defense of Mother as “white noise.” All we can do is say to Hitchens is “come and see.” His only hope is the Way of Beauty . . . and of course, prayer and fasting. Here is an excerpt of the Zenit interview with Father Langford:

Q: What did you learn about the Blessed Mother from Mother Teresa?

Father Langford: The book is a compendium of what I learned of Our Lady over the years, from watching and listening to this Saint of the Gutters. It is a simple apologia for Our Lady’s role, wrapped not in polemics, but in the humble sari of one of the gospel’s most credible and approachable witnesses.

It is impossible to observe Mother Teresa’s faith without being reminded of the faith of Our Lady. Though her darkness bore other names and other dimensions, Mary of Nazareth lived her own night of faith.

Consider Joseph’s months of doubt; finding no room in Bethlehem; the flight into Egypt; the years of Jesus’ absence from Nazareth; the hours of his agony on the cross; and her own agony as he lie in the grave. From these came the lessons of faith she shared with a young Mother Teresa.

Mother Teresa’s own life, and her sense of the role of the Mother of God, was that of “an ongoing Visitation,” a “going in haste” to bring God to others. This Marian vision was based on Mother Teresa’s own experience, but also firmly rooted in scripture.

The Gospel account of the Visitation in the first chapter of Luke shows obvious echoes of the “visitation” made by the Ark of the Covenant to David, also “in the hill country of Judea.” No one disputes that the Ark carried a special anointing of grace and divine presence, that it was itself a “theotokos” (“God-bearer”), though only made of wood.

Can God not do the same and more, in a latter Testament, with a new and better Ark? Are we scandalized that God can make of flesh what once was? Or has our generation understood “neither the scriptures nor the power of God?”

In the end, Mother Teresa would not be one to argue, but simply to say of this Marian mystery, as she so often did of the mystery of Christ hidden in the poor: “Come and see.”