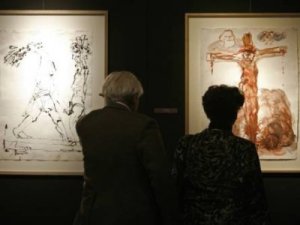 The arts contribute to the moral environment in which we live. Culture is the product of people and their particular mindsets. But culture is also contributes to the moral environment. It is is the moral and psychological air we breathe. I have long thought that a Catholic and chivalrous aesthetic is vital to the restoration of Christian sanity; hence, for example, my prudential support of the use of chapel veils.

To be fair, the Cardinal claims he did not know that a blasphemous depiction of The Last Supper was to be shown, and he had it removed; however, the rest of the exhibit still remains. Even in Vienna, one of the art capitals of the world, there is no excuse to be giving mixed messages. More importantly, our first duty is to God, and we must fight blasphemy in all its forms. For this reason, I support the TFP protest against this atrocity.

St. Louis of France, that paragon of chivalry and flower of courtesy, who poured himself out on behalf of his people, especially the poor and needy, would absolutely not tolerate blasphemy and punished most severely with corporal punishment. I am not suggesting a return to the medieval penal forms, but when something like this is defended by a churchman for the sake of art, we have a problem.

Our families are dysfunctional because the heads of our families are out in the bar (or out in the ether) instead of at home watching over the children and guarding the gates. It’s not completely the fault of fathers, though, we are not always very good children either.

4 thoughts on “The Culture of Death”