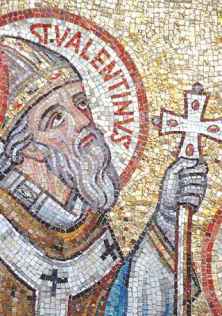 Well, the feast of “love” has arrived again. Lovers should read Part I of Deus caritas est and memorize, that is, learn by “heart,” the meanings of eros and agape. Possessive love is only fully joyful and gratifying when it is first sacrificial love.

Pope Benedict knew exactly what he was doing when he exploded the romantic myth about sex on demand. If only people would listen to him, rather than to Dan Brown, the merchants of death, and the sexploitative advertisers and media.

Here is chivalry at its best from the Golden Legend concerning St. Valentine:

Valentine is as much to say as containing valour that is perseverant in great holiness. Valentine is said also as a valiant knight, for he was a right noble knight of God, and the knight is said valiant that fleeth not, and smiteth and defendeth valiantly and overcometh much puissantly. And so Saint Valentine withdrew him not from his martyrdom in fleeing, he smote in destroying the idols, he defended the faith, he overcame in suffering.

3 thoughts on “The True Code of Courtly Love”