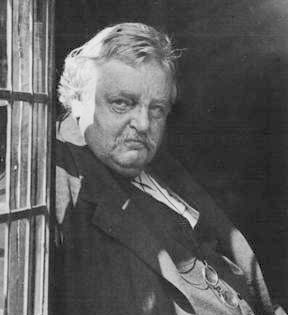 A recent exchange on this blog sent me back to the writings of the Apostle of Common Sense in order to make sure I was not going insane. I am quite sure that definitions and distinctions, principles and conclusions are very important to human thought, both in terms of ordinary human discourse and the exercise of faith. Unfortunately, as Chesterton has observed, common sense has been replaced with “uncommon nonsense.”

I thought I might post a bit of Chesterton in honor of common sense. It would seem to me that in the great chivalric tradition of the Military Orders like the Knights Templar and the Knights of St. John, the importance of fighting for a fixed truth should easily be seen. I think I have found a neat synthesis of Chesterton on the point of establishing first principles and fighting for them. Interestingly, I have done this by taking the last paragraphs from both the introductory and concluding chapters of Heretics, which are entitled respectively, “Introductory Remarks on the Importance of Orthodoxy” and “Concluding Remarks on the Importance of Orthodoxy”.

Several really important things to note about the book Heretics are that when G.K. wrote it he was not yet a Catholic, and that while he was intellectual enemies with those he criticizes, he was also personal friends with some of them, like George Bernard Shaw and H.G. Wells. In other words his dicussion of heretics had nothing to do with defending a certain religious creed, nor had he any personal animosity for those with whom he disagreed. He respected them as honest men, but he found their thought, not only disagreeable but dangerous. Very often it was not only this or that proposition that was at stake but thought itself.

“When we hear of a man too clever to believe, we are hearing of something having almost the character of a contradiction in terms. It is like hearing of a nail that was too good to hold down a carpet; or a bolt that was too strong to keep a door shut.” Chesterton was the implacable enemy of skepticism:

Man can be defined as an animal that makes dogmas. As he piles doctrine on doctrine and conclusion on conclusion in the formation of some tremendous scheme of philosophy and religion, he is, in the only legitimate sense of which the expression is capable, becoming more and more human. When he drops one doctrine after another in a refined scepticism, when he declines to tie himself to a system, when he says that he has outgrown definitions, when he says that he disbelieves in finality, when, in his own imagination, he sits as God, holding no form of creed but contemplating all, then he is by that very process sinking slowly backwards into the vagueness of the vagrant animals and the unconsciousness of the grass. Trees have no dogmas. Turnips are singularly broad-minded.

G.K.C. explains how the most practical person is the one who insists on definitions and starting with first principles, that is, starting with truth. Dale Ahlquist, President of The American Chesterton Society, has written a great introduction to Heretics. In it he talks about the importance of truth:

Clarity. The truth which Chesterton is defending should be obvious. But because Chesterton has to defend it, it obviously isn’t obvious. The heretics have obscured the truth, they have distracted us, they have won us over with lies. The first lie is that truth doesn’t matter.

Here is the specific text from the last paragraphs of the Introduction of Heretics that I think is so important. The choice of this text has nothing to do with the “grey-clad monk,” I assure you:

. . . I for one have come to believe in going back to fundamentals. Such is the general idea of this book. I wish to deal with my most distinguished contemporaries, not personally or in a merely literary manner, but in relation to the real body of doctrine which they teach. I am not concerned with Mr. Rudyard Kipling as a vivid artist or a vigorous personality; I am concerned with him as a Heretic– that is to say, a man whose view of things has the hardihood to differ from mine. I am not concerned with Mr. Bernard Shaw as one of the most brilliant and one of the most honest men alive; I am concerned with him as a Heretic–that is to say, a man whose philosophy is quite solid, quite coherent, and quite wrong. I revert to the doctrinal methods of the thirteenth century, inspired by the general hope of getting something done.

Suppose that a great commotion arises in the street about something, let us say a lamp-post, which many influential persons desire to pull down. A grey-clad monk, who is the spirit of the Middle Ages, is approached upon the matter, and begins to say, in the arid manner of the Schoolmen, “Let us first of all consider, my brethren, the value of Light. If Light be in itself good–” At this point he is somewhat excusably knocked down. All the people make a rush for the lamp-post, the lamp-post is down in ten minutes, and they go about congratulating each other on their unmediaeval practicality. But as things go on they do not work out so easily. Some people have pulled the lamp-post down because they wanted the electric light; some because they wanted old iron; some because they wanted darkness, because their deeds were evil. Some thought it not enough of a lamp-post, some too much; some acted because they wanted to smash municipal machinery; some because they wanted to smash something. And there is war in the night, no man knowing whom he strikes. So, gradually and inevitably, to-day, to-morrow, or the next day, there comes back the conviction that the monk was right after all, and that all depends on what is the philosophy of Light. Only what we might have discussed under the gas-lamp, we now must discuss in the dark.

Without clear distinctions we are operating in the dark. The thirteenth century was not a”dark age,” precisely because distinctions and clarity were considered so important, and confidence in the ability of the mind to know the truth was inherent in the search for wisdom.

Then in the concluding paragraphs of Heretics:

Let us, then, go upon a long journey and enter on a dreadful search. Let us, at least, dig and seek till we have discovered our own opinions. The dogmas we really hold are far more fantastic, and, perhaps, far more beautiful than we think. In the course of these essays I fear that I have spoken from time to time of rationalists and rationalism, and that in a disparaging sense. Being full of that kindliness which should come at the end of everything, even of a book, I apologize to the rationalists even for calling them rationalists. There are no rationalists. We all believe fairy-tales, and live in them. Some, with a sumptuous literary turn, believe in the existence of the lady clothed with the sun. Some, with a more rustic, elvish instinct, like Mr. McCabe, believe merely in the impossible sun itself. Some hold the undemonstrable dogma of the existence of God; some the equally undemonstrable dogma of the existence of the man next door.

Truths turn into dogmas the instant that they are disputed. Thus every man who utters a doubt defines a religion. And the scepticism of our time does not really destroy the beliefs, rather it creates them; gives them their limits and their plain and defiant shape. We who are Liberals once held Liberalism lightly as a truism. Now it has been disputed, and we hold it fiercely as a faith. We who believe in patriotism once thought patriotism to be reasonable, and thought little more about it. Now we know it to be unreasonable, and know it to be right. We who are Christians never knew the great philosophic common sense which inheres in that mystery until the anti-Christian writers pointed it out to us. The great march of mental destruction will go on. Everything will be denied. Everything will become a creed. It is a reasonable position to deny the stones in the street; it will be a religious dogma to assert them. It is a rational thesis that we are all in a dream; it will be a mystical sanity to say that we are all awake. Fires will be kindled to testify that two and two make four. Swords will be drawn to prove that leaves are green in summer. We shall be left defending, not only the incredible virtues and sanities of human life, but something more incredible still, this huge impossible universe which stares us in the face. We shall fight for visible prodigies as if they were invisible. We shall look on the impossible grass and the skies with a strange courage. We shall be of those who have seen and yet have believed (Heretics, “Concluding Remarks on the Importance of Orthodoxy”).

G.K. is not far off when he talks about asserting the dogma of the existence of real things in the face of “modern reason” or when he asserts that the propositions like “two plus two make four,” and “leaves are green in the summer” are nearly mystical when confronted with the new skepticism. It is really true, Our Lord promised a blessing upon all who did not see but believed, but now it is almost heroic virtue to believe when one does see.

Note the almost universal attack on the natural law that is conducted on a daily basis in the media, in our legislatures and in our court rooms. The innocent go unprotected and the peddlers of unnatural vice are given special status under the law. We are in desperate times.

It is only in our modern age that the West has flirted with solispsism. It is curious that nonsense like The Matrix has generated such serious attention from philosophers. Apparently there are more than just a few who wonder if after all “reality is just an illusion.”

I used to eat there. Really good noodles . . . I have these memories from my life . . . none of them happened. (Neo from The Matrix).

I realize that nowadays we have to discuss these things. Its just that every once in a while, I have to step aside and look to the guardians of common sense to make sure I am not going crazy.

4 thoughts on “A Breath of Fresh Common Sense from Chesterton”