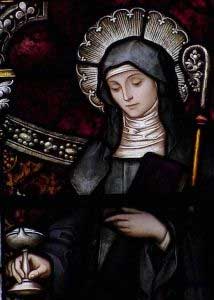 In Ireland, today is the Solemnity of St. Brigid of Kildare , patroness of the Emerald Isle. There is an interesting legend associated with her name, as I was informed by our Fra Solanus:

Brigid has been called “Mary of the Gaels” and a common salutation in the Irish language expresses the hope that “Brigid and Mary be with you”. Her influence is not confined to Ireland, however, for she has been revered throughout the ages in innumerable countries. One legend is that the medieval Knights of Chivalry chose Saint Brigid as their patroness, and that it was they who first chose to call their wives “brides”.

Now, Fra Solanus swears that the “Bride” part is more than a legend. The etymology I looked at traces bride back to byrd from Old English, meaning “married woman.”

In any case, the connection between St. Brigid’s privelege of being referred to as the “Mary of the Gaels” and of being and ideal of womanly perfection for the followers of the way of chivalry is another thread of leading back to the origins of chivalry in devotion to the Blessed Mother.