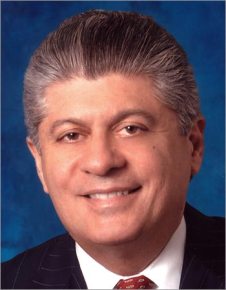 Judge Andrew Napolitano has recently written a book, A Nation of Sheep, in which he “frankly discusses how the federal government has circumvented the Constitution and is systematically dismantling the rights and freedoms that are the foundation of American democracy.” Sound’s like a good read.

More interestingly though is his recent interview with Celebrate Life Magazine, in which he manifests a very bold pro-life perspective. Most interesting is the end of the interview where predictably and wisely commends the pro-life leadership provided by women. Surprising, at least for me, is who tells us his favorite pro-life leader is:

On that note, Judge Napolitano’s favorite pro-life leader is a woman. He explained, “I say that because it’s politically wise and because the Church teaches that we should go to our Lady, the Blessed Mother. Not a Mass should be said without reference to her. Not a war should be waged, not a prayer should be uttered, not a contact should be sought without her assistance.

That pretty much elicites a “wow!” from me. He states himself simply without explanation, but his words say volumes. I have scattered a lot of ones and zeros across cyberspace trying to get across this very important Catholic male intuition. The Judge must have had a pretty traditional Italian upbringing. This certainly is my choice for “quote of the year,” so far. Let’s scatter those digits one more time:

Not a Mass should be said without reference to her. Not a war should be waged, not a prayer should be uttered, not a contact should be sought without her assistance.

Get that through your heads gentlemen. Memorize it. Engrave it on your hearts. Keep it by your side, as a sword, and let it guide you by day and by night.

Thanks to an Other Mary for the lead on this one.