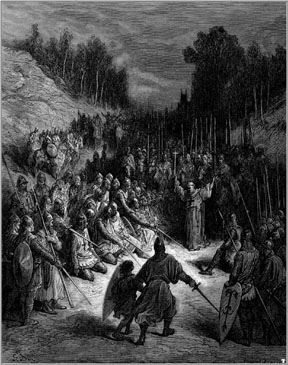 It takes a lot out of a friar-priest to preach to all you raucous knights and men at arms. Try to be good while I am away.

Back on Thursday. Not a long retreat, but I’ll take anything I can get.

While I am away, here is something to think about from Blessed Raymond Lull, Franciscan tertiary, martyr and philosopher. Previous to his religious profession, he had been a knight, and had formulated the earliest known manual in the West on Chivalry, his Book of Knighthood and Chivalry:

Strength is a virtue which remains and dwells in noble courage against the seven deadly sins, by which men go to hell to suffer and sustain grievous torments without end. The sins are Gluttony, Lechery, Avarice, Pride, Sloth, Envy, and Ire. Then a knight who follows such a way, goes not in the ways of nobility of heart, nor should he make these sins his habit. Gluttony causes feebleness of body by overmuch eating and drinking. In overmuch drinking, Gluttony causes Sloth and laziness of body, which grieves the soul. All vices are contrary to chivalry, therefore the strong Courage of a noble knight fights with the aid of Abstinence, Prudence and Temperance that he has against Gluttony.

The translation is by Brian R. Price, who is founder of the Company of St. George, and who advocates a code of chivalry minus God. “A knight must have faith in his beliefs.” One hesitates to ask how it could be otherwise. Deep.