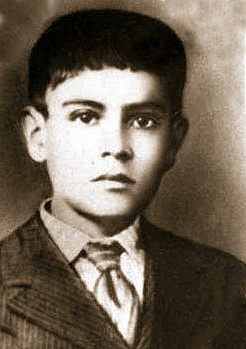 At our father-son encampment last month during a talk, I asked the young boys who was their hero, the one they admired more than anyone else. (I told them to mention someone other than Jesus). I mostly heard the names of saints that I knew, but one little five year old boy shouted out “Blessed Luis!” I was perplexed at first because I thought he said “Blessed Louise,” but even after his father clarified, I drew a blank. I said “You’ll have to tell me all about him after,” and then went on to finish the talk.

Later on that day, the father and son did give me lowdown on Blessed Luis, and I sure was glad I had asked for the story. Heap awesome.

Blessed José Luis Sánchez del Rio was born in Sahuayo, Mexico on March 28, 1913. When he was 13 the Cristero war broke out. Catholic rebels against the anti-Catholic Masonic government escalated their resistance and took up arms. Blessed José Luis’ two older brothers joined the rebels, but he was held back by his mother.

The boy went to the rebel general, Prudencio Mendoza, and begged for an opportunity to give his life for Christ. In the end the general agreed to let him be flag bearer, and off the youngster went to war.

During one battle, the general’s horse was killed, so Blessed José Luis gave him his horse and then headed for cover, where he fired on the enemy until he ran out of ammunition. He was eventually captured by the government forces, who ordered him to renounce his faith. José Louis remained undeterred.

His captors forced him to witness the execution of one of his fellow Cristeros, thinking that this would frighten him. Instead he exhorted the man to die for Christ, and promised that they would soon meet in heaven.

Unable to break his resolve, the government ordered Blessed José Luis’ execution, and on February 10, 1928 they cut the bottoms of his feet and forced him to walk to a cemetery, all the while tempting him with promises of freedom if he would deny Christ. Through his tears, he refused and continued to walk.

His last words were a shout of “Long live Christ the King!” The government troops fired on him and he fell to the ground mortally wounded. He dipped his hand in his own blood and traced the sign of the Cross on the ground. His enemies fired again, and Blessed José Louis died kissing the cross. He was only 14 years old.

The little five year old boy, who holds Blessed José Luis as his hero, heard the story read to him by his father and he loved it. It is a story of Knights and Dragons. It’s even better than that, because this story is true in the Primary World.

A boy loves danger, even if sometimes he is are afraid of the dark. A boy knows what a real hero is, and if given a chance will become one.